“I am thrilled that Conner has accepted this extension. He has already proven his versatility on the podium and was an incredibly helpful artistic partner during our first three recording weeks this season,” said Music Director Thierry Fischer. “Conner has the kind of talent that is in great demand across the country, so I’m very happy we can keep him in Salt Lake City a little while longer.” 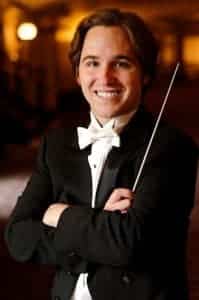 Conner Gray Covington began his position as Assistant Conductor of the Utah Symphony this season after appearing as a guest conductor on the 2017 Deer Valley® Music Festival Chamber Series. In addition to leading the orchestra in various programs for community and chamber concerts, regional tours, and the Deer Valley Music Festival concerts in Park City, he plays an active role in the orchestra’s education department, conducting around 50 family, education and outreach concerts each season. He also serves as a spokesperson for the Utah Symphony in pre-concert lectures and community events, and acts as a mentor for several youth orchestras in a variety of regional guest clinics and performances.

In June of 2017, he completed his tenure as the Rita E. Hauser Conducting Fellow at the Curtis Institute of Music in Philadelphia where he worked closely with the Curtis Symphony Orchestra and the Curtis Opera Theater, while also being mentored by Philadelphia Orchestra Music Director Yannick Nézet-Séguin. He made his Carnegie Hall debut in February 2016 with the Curtis Symphony Orchestra sharing the podium with Ludovic Morlot. Mr. Covington began his career as Assistant Conductor of the Memphis Symphony Orchestra and Music Director of the Memphis Youth Symphony Program. A two-time recipient (2014, 2017) of a Career Assistance Award from the Solti Foundation U.S., he worked with the Nashville Symphony as a featured conductor in the 2016 Bruno Walter National Conductor Preview presented by the League of American Orchestras.

Mr. Covington has also worked with the St. Louis Symphony and Virginia Symphony as a guest conductor and has served as a cover conductor for the Philadelphia Orchestra, the Los Angeles Philharmonic, Pittsburgh Symphony, Atlanta Symphony, Kansas City Symphony, the Florentine Opera Company (Milwaukee, WI), and the Britt Festival Orchestra (Jacksonville, OR). In 2015, Mr. Covington was invited as one of three conductors to participate in the Pacific Music Festival Conducting Academy in Sapporo, Japan. He has also worked with the Tonhalle Orchester Zürich as part of the 6th International David Zinman Conducting Masterclass. In 2014, Mr. Covington was selected by members of the Vienna Philharmonic to attend the Salzburg Festival as a recipient of the Ansbacher Fellowship for Young Conductors. Mr. Covington competed in the prestigious Malko Conducting Competition in 2012 in Copenhagen, Denmark, where he conducted the Danish National Symphony for a jury headed by Lorin Maazel and was the youngest participant to advance to the third round. He was invited back to compete in the 2015 Malko Competition for a jury headed by Sakari Oramo. Mr. Covington also worked with the New Japan Philharmonic in the 2012 Tokyo International Conducting Competition and advanced to the semi-final round.

Mr. Covington was selected for his Utah Symphony position by unanimous choice by an advisory committee comprised of Maestro Fischer and orchestra musicians following an extensive audition process that involved conducting several concerts in front of live audiences.