SALT LAKE CITY, Utah (February 9, 2018)– Join the Utah Symphony and Music Director hierry Fischer the final weekend of February and the first weekend of March for two programs of rarely-performed works celebrating the 100th birthday of beloved late composer, conductor, and pianist Leonard Bernstein. Tickets are priced from $23-83 and can be purchased at utahsymphony.org or by calling (801) 533-6683.

On February 23 and 24, 2018 at 7:30 PM, indulge in Bernstein’s startling portrait of modern uncertainty, Symphony No. 2 “The Age of Anxiety,” featuring guest pianist Conrad Tao. Mr. Tao is a frequent guest on the Abravanel Hall stage; he last performed with the orchestra in March 2015, where he played Beethoven’s Piano Concerto No. 5 “Emperor.” The program begins with Saint-Saëns’ bone-rattling “Danse macabre” and his precocious Symphony No. 1, which the orchestra will perform for the first time. On March 2 and 3, 2018 at 7:30 PM, the birthday celebration continues with the old-fashioned sweetness of Bernstein’s “Chichester Psalms,” and the wildly eclectic reminiscences of his Divertimento for Orchestra. The program also features Saint-Saëns’ Symphony in A Major, and Stravinsky’s “Symphony of Psalms.” This once-in-a-lifetime celebration is not to be missed—both programs guarantee a moving experience honoring the wonderful life of Leonard Bernstein.

Both weekends, the Saint-Saëns works will be recorded live s part of the Utah Symphony’s 2017-18 commitment to perform and record l five of the French composer’s symphonies on the European label Hyperion, published on three CDs as the orchestra’s fifth, sixth, and seventh recordings with Maestro Fischer. The Utah Symphony is the first American orchestra to ever record five of Saint-Saëns’ symphonies. 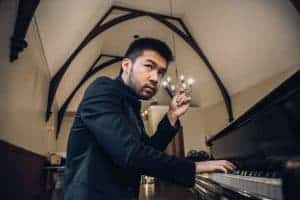 On February 23 and 24 at 7:30 PM, the Utah Symphony, pianist Conrad Tao, and conductor Thierry Fischer begin the Bernstein birthday celebration with the communicative Symphony No. 2 “The Age of Anxiety,” which the orchestra has not performed for a decade. The evening begins with Saint-Saëns’ equally expressive “Danse macabre,” and his Symphony No. 1 in a Utah Symphony debut. Tickets are priced from $23-$83 d can be purchased at utahsymphony.org or by calling (801) 533-6683.

Symphony No. 2 “The Age of Anxiety” was inspired by W.H. Auden’s poem, “The Age of Anxiety: A Baroque Eclogue.” “[The poem] began to affect me lyrically when I first read it in the summer of 1947,” wrote Bernstein. “From that moment the composition of a symphony based on ‘The Age of Anxiety’ acquired an almost compulsive quality.” What resulted was a creation completely outside the sphere of traditional program music—Bernstein’s eclectic and impassioned views of modern city life.

To avoid rejection of a first performance, the 17-year-old Saint-Saëns (and a conductor colleague) submitted his Symphony No. 1 anonymously. The final movement of Symphony No. 1 was written for enlarged orchestra, including two saxhorns (euphonium or bass tuba) to introduce a Wagnerian march, a fugue, and a triumphant conclusion. This marks the first time the orchestra will perform the work.

World-renowned pianist and composer Conrad Tao has been called a musician of “probing intellect and open-hearted vision” by “The New York Times.” In the 2013-14 season as artist-in-residence with the Dallas Symphony Orchestra, Mr. Tao premiered his orchestral work, “The world is very different now,” a piece commissioned in honor of the 50th anniversary of the assassination of President John F. Kennedy. Mr. Tao’s career has inspired eight consecutive ASCAP Morton Gould Young Composer awards, and the Carlos Surinach Prize from BMI.

On March 2 and 3 at 7:30 PM, Utah Symphony’s centennial celebration continues under the baton of Thierry Fischer with a program of not-often-performed repertoire showcasing Bernstein’s choral work “Chichester Psalms,” and Divertimento for Orchestra. The evening includes guest artists from the Utah Symphony Chorus, University of Utah Choirs (under the direction of Dr. Barlow Bradford,) and Madeline Choir School choristers Oliver Laughlin and Anthony Villanueva. The program will also feature Saint-Saëns’ Symphony in A Major – a Utah Symphony debut – and Stravinsky’s “Symphony of Psalms,” which has not been performed here for more than a decade. Tickets are priced from $23-$83nd can be purchased at utahsymphony.org or by calling (801) 533-6683.

The hopeful choral work “Chichester Psalms” juxtaposes typical chapel vocals with Judaic liturgical tradition—a strategic combination that aimed to inspire peace in Israel, a young country at the time facing wild turmoil. Today, “Chichester Psalms” is celebrated as a brilliant yet accessible piece that inspires optimism in listeners. The Utah Symphony has not performed Bernstein’s “Chichester Psalms” in 10 years, and it has been two decades since they last performed his Divertimento. Written for the Boston Symphony Orchestra, Divertimento is composed with an animated range of styles, featuring popular American music to classic symphonic repertoire from various eras. This broad array of styles serves as a tribute to fond memories. “It reflects my youthful experiences here when I heard my first orchestral music,” said Bernstein, a Boston native. “I nearly fell out of my chair I was so excited.”

The Utah Symphony Chorus is an audition-only group composed of professional singers from the Salt Lake City area that collaborates with the Utah Symphony throughout each season.

The University of Utah Choirs, directed by Dr. Barlow Bradford, have achieved international acclaim through their demanding repertoire with a wide range of musical styles and eras.  International tours include Spain, France, Israel, England, the Netherlands, Italy, the Czech Republic, Hungary, Croatia, Slovenia, Austria, and Germany.

Over the course of his musical career, Dr. Barlow Bradford has distinguished himself as a conductor, composer, arranger, pianist, organist, and teacher. As an orchestral and choral conductor, he co-founded the Utah Chamber Artists in 1991 and has led that organization to international acclaim for its impeccable, nuanced performances and award-winning recordings. Dr. Bradford’s focused, energetic conducting style led to his appointment as Music Director of the Orchestra at Temple Square in Salt Lake City and Associate Director of the Mormon Tabernacle Choir. His compositions and arrangements have garnered attention for their innovation and dramatic scope, from delicate, transparent intimacy to epic grandeur.

Music Director of the Utah Symphony since 2009 and currently extended to 2022, Thierry Fischer has revitalized the orchestra with creative programming, critically acclaimed performances, and new recordings. Highlights of his tenure include a multi-season Haydn symphony cycle; Mahler, Beethoven and Nielsen cycles; and a tour of Utah’s five national parks.  In celebration of its 75th anniversary season, the orchestra appeared at Carnegie Hall in April 2016 to critical acclaim and released an album of newly commissioned works by Nico Muhly, Andrew Norman, and Augusta Read Thomas on Reference Recordings.

A pre-concert lecture free to all ticketholders will take place at all Masterworks Series performances in Abravanel Hall’s First Tier Room 45 minutes prior to each performance.