This concert’s highly-personal repertoire was set by the artistic vision of Mr. Covington, who reveals: “The Haydn is a piece that I played back in high school when I was in youth orchestra; I find it to be a very compelling piece and have always wanted a chance to conduct it. The Britten is based upon piano pieces by Rossini that Britten orchestrated when he was only 23. Hence, they really sound more like Rossini than Britten. He originally wrote them as music for a documentary and eventually condensed the music into a suite. It’s incredibly charming and light music.”

Mozart’s symphonies No. 39, 40, and 41 were composed within the span of six weeks and were written without a specific commission or occasion to prompt their composition, which was quite unusual at the time. “I chose to program [Mozart’s Symphony No. 39] because it has been quite a while since we played it and because it’s a masterpiece,” said Mr. Covington. “There’s a good chance that Mozart never heard this symphony performed.” 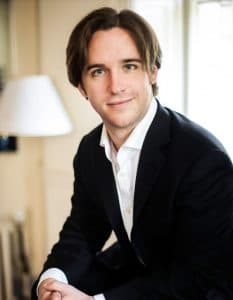 The connection between Mr. Covington and contemporary composer TJ Cole was one forged during their time at the Curtis Institute of Music in Philadelphia, where they both studied music.

“Cincinnati Enquirer” has called works by Ms. Cole “mystical, slightly minimalist quality, with imaginative orchestral tone painting.” Besides taking commissions, Ms. Cole is also interested in artistic community service projects. She collaborated with bassist Ranaan Meyer as an orchestrator on his project, The World We All Deserve Through Music, and with First Person Arts by co-curating and performing in a musical story slam. During a year-long ArtistYear Fellowship, TJ was able to co-run and collaborate in musical performances and songwriting workshops with residents of Project HOME, a Philadelphia based organization fighting to end chronic homelessness.

Ms. Cole has been commissioned by the Cincinnati Symphony, the Louisville Orchestra, the Baltimore Symphony, Time for Three and the Sun Valley Summer Symphony, among others, and served as a composer-in-residence at the Cabrillo Festival of Contemporary Music in 2014. She received her Bachelor’s degree in composition from the Curtis Institute of Music, where she and Mr. Covington became acquainted.