“I believe music feeds our souls. Unbreakable is the power of art to build community. Humanity has and will always work together to further music’s flexible, diverse capacity and innate power,” said Ms. Thomas. “The magnificence and energy of massed musical resources, such as an orchestra, are humbling, inspiring, and exemplify hope, solidarity and teamwork.”

The collaboration occurred with incredible speed and momentum, spurred by a call Maestro Fischer made to Ms. Thomas in mid-April to invite her to create a new, four-minute fanfare that could be performed by the Utah Symphony, with the stipulation that each musician would be performing alone from their homes. “Fanfare of Hope and Solidarity” was composed in late April and early May 2020 and it was a mere two weeks from that phone call until the time that Ms. Thomas delivered a full orchestral score and set of orchestra parts. Utah Symphony musicians recorded the music in May 2020.

“The world has momentarily stopped. Our desire for creativity is multiplied,” said Maestro Fischer, whose active support of contemporary composers has been one of the calling cards of his decade-long tenure as music director. “New music is a call to look, listen, and guess what is rarely said. New music reveals the gods and demons hiding in the depths of our souls, and then transforms them into a transfiguring beauty’.“

The composition, which features the brass section of the Utah Symphony, is majestic, optimistic, blazing, and passionate, yet, in the center of the piece, a robust expressive and eloquent lyrical passage unfolds a range of emotions. Due to the nature of how the piece was premiered and recorded with musicians in their own homes, Ms. Thomas employed creative tactics to work around certain inherent challenges. For example, she was able to write for a very few, small percussion instruments which happened to be stored in the homes of the percussionists. The composition ends as if reaching skyward – affirming and hopeful – as bells’ resonance hangs in the air like sunlight ripples.

A video to accompany the music was created by Andrea Peterson. Utah Symphony musicians recorded the music in their homes, and audio engineering was completed by Stoker White and Funk Studios. “Fanfare of Hope and Solidarity” is published by Nimbus Music Publishing.

Ms. Thomas created a visual map to the piece: 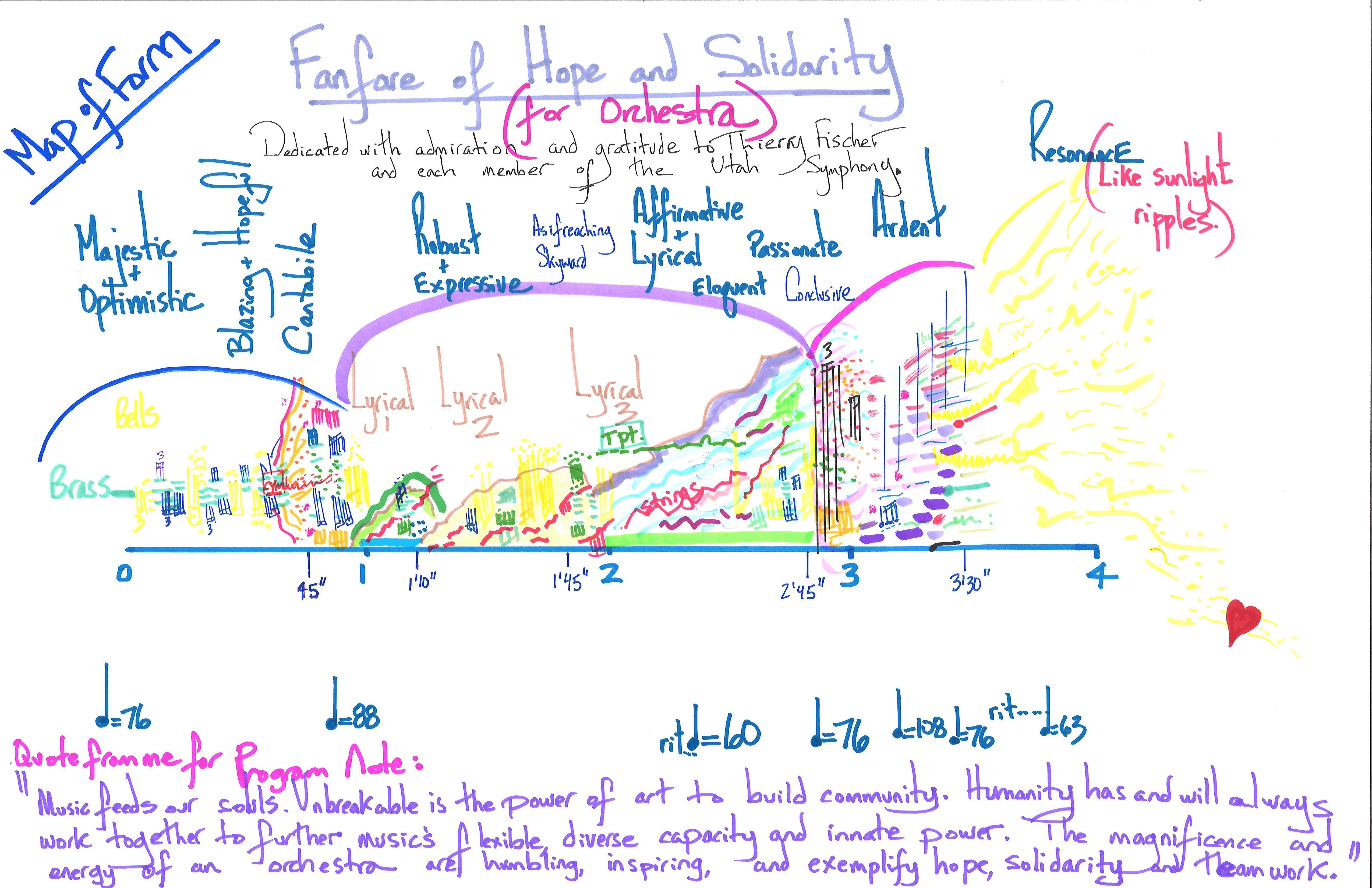 “How fortunate to have been able to collaborate on the world premiere of a new piece of hope with the dear talented, imaginative, poetic and understanding composer Augusta Read Thomas,” said Maestro Fischer. “She has immediately responded to our offer with the same urgency for new ideas and innovation which are driving the Utah Symphony during this unprecedented times.”

Since his appointment as Music Director in 2009, Maestro Fischer has expressed an ongoing commitment to commissioning new music for orchestra from today’s leading generations of composers both established and new voices. During his tenure, the orchestra has commissioned and premiered works by Simon Holt, Michael Jarrell, and Tristan Murail, among other composers. In February 2015, Ms. Thomas wrote a Utah Symphony-commissioned piece entitled “EOS (Goddess of the Dawn), A Ballet for Orchestra,” which she said, “exhibits a kaleidoscopic variety of rhythmic syntaxes, radiant colors, and resonant harmonic fields.” The orchestra later released a live recording of the world premiere on “Dawn to Dust” along with works by two other contemporary American composers: “Control (Five Landscapes for Orchestra)” by Nico Muhly, and “Switch,” a percussion concerto by Andrew Norman with soloist Colin Currie. During the 2020-21 season, Maestro Fischer and the Utah Symphony have commissioned composer Arlene Sierra’s “Bird Symphony,” which is scheduled to be premiered at its April 23 & 24, 2021 performances at Abravanel Hall.